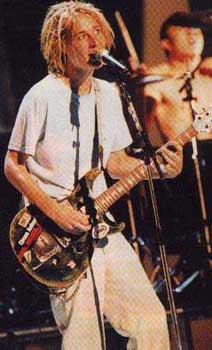 Later in the evening, the band was presented with the only award decided by the public rather than voters from the Australian music business.

silverchair was chosen as Artist Of The Year by viewers of Channel [V] and readers of Australian music magazines and newspapers who voted by phone, mail and e-mail.

The Artist Of The Year prize was presented as part of ARIA ceremonies at Sydney's Capitol Theatre.

Three weeks earlier, the public chose silverchair as winners of the MTV Video Music Award for Best Australian Video, so the ARIA ceremony marked the second time in a month that fans elected the band as winners of a major award.

The ARIA awards are Australia's equivalent of the U.S. Grammys. The event was televised nationally on Australia's Network Ten.

In 1996, silverchair were presented with an Outstanding Achievement Award at the 10th annual ARIA ceremony. It was the first time since 1990 that the association had presented such an award.

The appearance at the '97 ARIAs was the 'chair's last public commitment for two months prior to their Summer Freak Shows '97 tour across Australia.