The latest version of silverchair's live show is a solid 16-song set marked by the tight rhythm section of Ben Gillies and Chris Joannou, and the increasingly self-confident stage presence of singer-guitarist Daniel Johns.

The band's Sept. 5 show at the Avalon in Boston featured eight songs from their most recent album Freak Show, seven from their debut Frogstomp, and an excellent live version of Spawn from the soundtrack of the recent film of the same name. The Boston show also featured an appearance by drummer Gillies on vocals, a stage dive by silverchair's sound guru Peter Ward, and birthday salutes to manager John Watson and Amy Osbourne (daughter of British rocker and former Black Sabbath frontman Ozzy Osbourne).

The show opened with Slave and Leave Me Out, followed by Johns' first spoken words of the night.

The Closing and Pure Massacre were up next, followed by more comments from the stage by Johns.

"Thank you," he said. "Hi everyone. We're silverchair, and we play music occasionally. Ready? I'm gonna play this by myself."

Cemetery was particularly enjoyable during this adults-only show with the absence of screaming during this quiet and serious song.

Pop Song For Us Rejects was appreciated by the crowd, as was a rendition of Tomorrow with special lyrics:

"It's two people's birthday," Johns said after the song. "Not today exactly, but in the vicinity of this day. Amy and Mister John Watson. So happy birthday to the two birthday people, and rock, rock on and continue to get older as the human race will progress and turn into donkeys." Johns then introduced Gillies to sing "a Korn version of Happy Birthday."

"Can everyone sing it with me, please?" Gillies implored. Unfortunately, few came to his rescue, and the audience was reminded why Johns is the singer in silverchair. Johns accompanied Gillies on guitar once he was able to find the approximate key in which Gillies was singing (if you could call it singing!)

"That was grunge," Johns said after Gillies returned to his drum kit. "Ahh, Ben left spit!"

Quickly, Johns was back to business.

After a brief intermission, a bra found its way on stage and Johns passed it to the barechested Gillies.

"Ben's the drag queen," Johns noted. "He's gonna dress for you Bostonians." Apparently, someone then made a comment of a challenging nature to Johns. 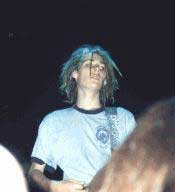 What? Fuck you!" he said, tongue firmly planted in cheek. "I'd just like to warn you, I've been pumping iron. Hey, I'm not joking. I went to the gym. Do you wanna see me flex? Yeah?" He paused. "I'll wait until I'm bigger, next year. Next -- in five years' time I'll come back, you'll be scared."

Johns, Gillies and Joannou then managed to knock the crowd out with Spawn. The song is more dramatic and powerful in live performance than it is in the movie soundtrack. A highlight of Spawn live is Joannou's solo, during which a spotlight frames the hard-rocking bassist on stage.

Near the end of the band's traditional closer, Israel's Son, sound engineer Peter Ward took to the stage and with little hesitation and obvious gusto, dove off the stage and was safely returned to an upright position.

The final international headlining performance for silverchair in 1997 was a raucous, energy-filled affair. With a festival date in Chicago the next day, the band quickly returned to their Boston hotel, but Gillies came back to the venue with manager Watson to greet fans who had waited outside the Avalon following the show. Joannou later joined Watson and several friends at a nearby bistro after the show. (Chris had orange juice, in case you were wondering.) 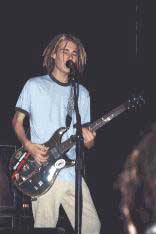 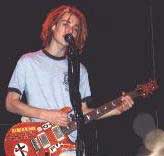 Ah, what shall we say about Boston -- other than it was the single most unbelievable time of our entire lives! Pete's review was so on target that we honestly can't think of anything to add, except a few pictures and ONE little story that we just can't hold back.

During the encore, Dee got a wild hair to offer the band a sacrifice of her underwear. She chucked one of Victoria's least-kept secrets up on stage and there it landed, right at Daniel's feet. Being the gentleman that he is, he threw the bra to Ben, who quickly put it on (and wore it quite nicely, we might add!)

Needless to say, Dee and I were beside ourselves with giddiness (you'd never guess two over-20 year olds were writing this, would you?) and we greedily snapped pictures of the whole ordeal.

After the show was over, Ben removed the bra and tossed it onto the stage. Luckily, a nice security guard picked it up and offered it back to Dee, drenched with sweat and the not-so-pleasant scent of a drummer (the bra, not the security guard!)

And there you go -- hell, can you blame us for sharing? We thought it was tha' shit!